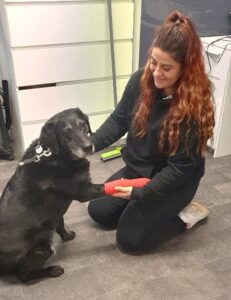 Pawsome Paws Dog Grooming & Training Academy, as the name implies, a dog grooming provider that also teaches dog grooming via Open College Network West Midlands. The business is based in Burntwood, Staffordshire, and the team consists of four people.

Dealing with dogs on a daily basis, the team recognised that they needed to have further training in canine first aid. Director Jackie Simmonds had completed a course previously and been awarded a certificate, but this was due to expire; and the rest of the team had only ever done an online course, which didn’t give them the hands-on experience required to deal with emergencies. 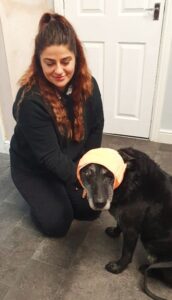 When we asked Jackie about her experience with the Skills Hub, she said: “I heard about the Skills Hub via Lynn Eccleston from Staffordshire Chambers, who was absolutely brilliant with the advice that she gave and signposted me to the Skills Hub.

We used the Skills Hub for all of the staff to undertake a Canine First Aid course, which was a hands-on accredited course delivered by a well respected Vet Nurse called Rachel Bean, who came to the salon.

Now that we have had hands-on training, it has given us confidence and reassurance that we are able to deal with any emergency that may arise whilst the dogs are in our care. We use sharp scissors and clippers on moving, wriggly dogs, and although we’ve thankfully never had any mishaps, it’s good to know that we can deal with them. 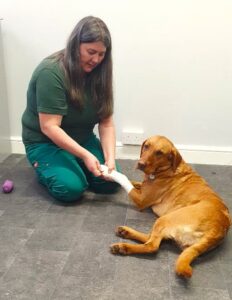 I upgraded our Canine First Aid medical box following on from the course and we now have Pet First Aid posters around the training salon to remind us what to do. We also handle numerous dogs with illnesses such as epilepsy, and we now know how to respond should a dog fit whilst in our care.”

Only a few months after completing the course, Jackie was able to put the First Aid training to use when she unfortunately witnessed a cat being injured by a car outside of the shop. She remembered learning during the course that injured animals usually lash out when in pain, so rather than following her impulse to immediately run over and pick up the cat, Jackie made sure to take several clean towels out of the salon with her, placing them over the injured animal before scooping it up. Sadly, the cat was very badly injured and passed away en route to the nearest vets; but thanks to the First Aid training, Jackie was able to start bringing the cat to safety without risking an injury to herself.

You can learn more about Pawsome Paws on their website: Pawsome Paws Dog Grooming and Training Academy Burntwood (pawsomepawsburntwood.co.uk)